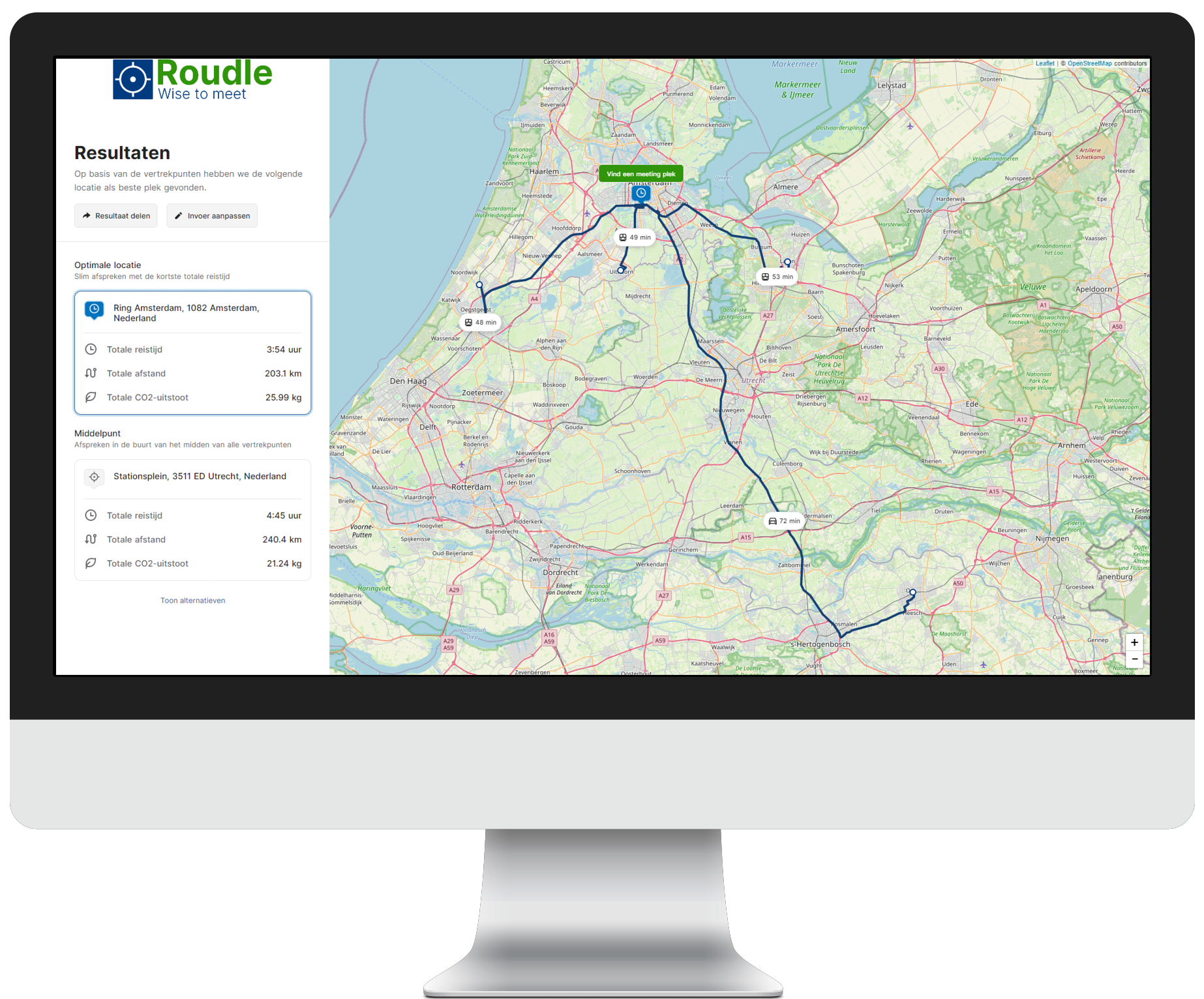 This week Roudle.com was launched. This new website calculates the best place for the user to meet with several people, so that you have as little travel time as possible.

Even in a world in which you increasingly meet each other online, it remains useful to meet face to face every now and then. Whether for a business appointment, for example a training or private: the question ‘where do we meet?’ is often not easy to answer. By meeting at the wrong place, you incur unnecessary travel time and costs, you end up in unnecessary traffic jams and the environment is unnecessarily burdened.

Roudle is a new Dutch startup that solves this problem: Enter where everyone comes from on roudle.com and you will immediately see where it is best to meet, taking into account the actual travel times and traffic situations. Often the advice surprises, because your feeling often lets you down with these kinds of puzzles.

“The reason behind Roudle is frustration”, says initiator Christiaan Rasch; “I once wanted to meet someone from Haarlem, Delft and Eindhoven and I wasn’t really sure where we could best do that. Your gut tells you that it’s best to meet somewhere around Utrecht, but if you start calculating all kinds of possible places with a route planner, you find out that your gut feeling is letting you down: By meeting in Utrecht you make such a 20% too many kilometers, costs and an unnecessary amount of CO2 is also released into the air”. Worldwide there are hardly any apps or websites that help with such an issue. “If they are already there, they often mark a simple center point on the map,” continues developer Thijs Brentjens, “while the road network is of course more complex. Sometimes it is more advantageous to meet in a completely different place, such as at a starting point of one of the participants, or at a certain junction.”

The operation of Roudle is simple: The user chooses two to six starting points in the Netherlands. By using extensive traffic data and smart mathematical algorithms, the user is presented with the objectively best solution within half a minute, not colored by the interests of sponsors or advertisers. Then, if desired, Roudle helps to find a restaurant, hotel or shared office near the optimal point and share this information with the other participants of the appointment.

Roudle was conceived and created by a small team led by Christiaan Rasch and Thijs Brentjens. A few months ago they won the Smart Mobility Challenge of the province of Utrecht and with that prize money they were able to build Roudle. The team of this start-up is not sitting still and has many expansion plans within and outside the Netherlands, such as smart appointment apps and adding public transport planning.

Roudle started as a tool for motorists, but public transport will also be added in due course, so that you can also find the optimal meeting point if, for example, someone comes from Enschede by train, one person comes from Amsterdam with a car and one person with a car from Eindhoven.

Brentjens: “This summer we will also add traffic jam forecasts, so that you will soon be advised a different meeting point for Monday morning than for Wednesday afternoon. We are now adjusting our mathematical algorithms for this with large amounts of traffic information from TomTom. A complex job, but a nice next step for Roudle.”

At this moment, Roudle can be used in The Netherlands, Belgium and Luxemburg via www.roudle.com.